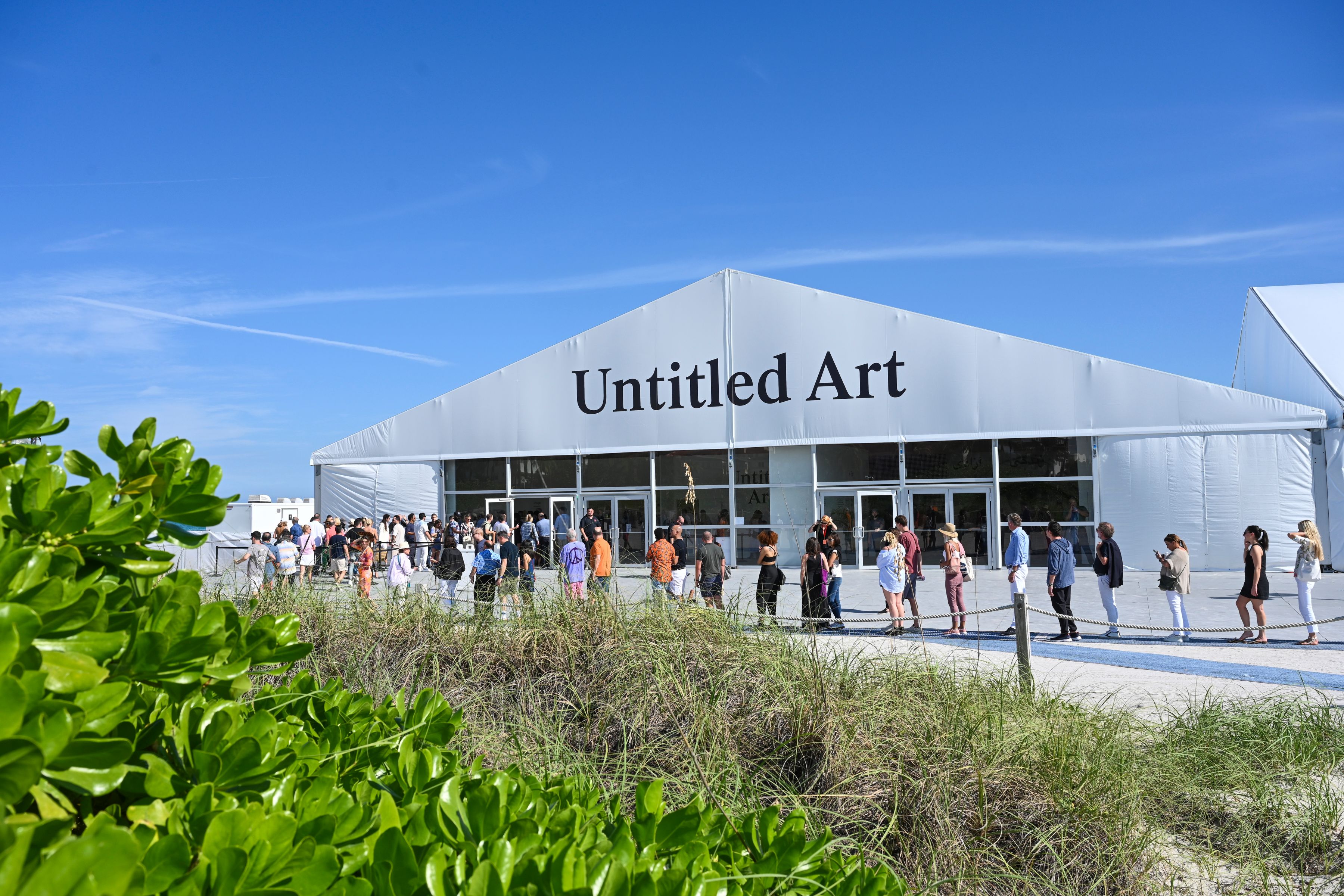 Miami Beach, FL. December 5, 2022 – The 11th edition of Untitled Art brought together over 140 exhibitors from around the world, reporting vigorous sales and an overall attendance of 50,000 guests throughout its VIP and public days. Located on the sands of Miami Beach, the fair presented a vibrant cultural program throughout the week, both onsite and throughout the grounds of Lummus Park. Untitled Art was attended by high-level patrons and leading private collectors from North America and across Europe, the Middle East, Asia and Africa, as well as directors and leadership figures from over 260 institutions and museums, and over 350 curators from cultural organizations and independent initiatives alike. Untitled Art 2022 took place from Tuesday, November 29 – Saturday, December 3, 2022, with a VIP and Press Preview on Monday, November 28.

Awarded in support of exhibitors and artists, the inaugural Untitled Art 2022 Exhibitor Prizes were launched in line with Untitled Art's commitment to supporting the larger art ecosystem beyond the fair, in partnership with this year's Premier Prize Partners, and the founding Untitled Art Ambassadors Committee.

The Nest Prize by Vortic was awarded to Casa Hoffmann, an exhibition space in Colombia, dedicated to the production and exhibition of contemporary art research projects commissioned to curators and academics. With jury selection support from Alex Gartenfeld, Artistic Director of the Institute of Contemporary Art, Miami.

Artwork by Aglaé Bassens (presented by HESSE FLATOW), Alba Triana (presented by Casa Hoffmann), and Pablo Benzo (presented by Steve Turner) has been acquired through the Colección Solo Acquisition Prize. With jury selection support from Mario Cader-Frech, Founder and Chairperson of Y.ES Contemporary.

CCA Andratx Artist-in-Residence Prize was awarded to Wendy Cabrera Rubio (presented by General Expenses), for a one-month residency in Mallorca. With jury selection support from Andrew Freiser, longtime exhibitor of Untitled Art and Co-Owner and Director of Fredericks & Freiser.

SGR Galería was awarded the Last Resort Artist Retreat Residency Prize, where artist Lorena Torres will be invited on the inaugural cycle of residents in 2023. With jury selection support from Hank Willis Thomas, renowned conceptual artist and Founder of the artist-led platform For Freedoms.

The Pébéo Production Prize will be announced in 2023, with jury selection support from Sarah Arison, President of the Arison Arts Foundation and Board Chair of YoungArts.

“The fair was great for us– I’d say the best edition for our gallery so far. We had a strong response from collectors and institutions, and we sold almost every artist on the booth and sold our entire inventory of two of them (Diana Fonseca and Ariamna Contino). Many people showed genuine interest in our program and are now watching closely. It was a very successful event,” states Christian Gundin, the Director of El Apartamento (Havana, Cuba).

"We were delighted to participate in this year's Untitled Miami with our solo booth of young Hungarian artist Bozó Szabolcs (Szabi), introducing his extravagantly joyful painterly universe to an American public for the first time.The energy at the fair was palpable - we found ourselves in great company and the positive reception his work received was overwhelming. It was great to meet so many of the gallery's dedicated followers in person as well as many new supporters," says CARL KOSTYÁL GALLERY (London, Stockholm, Milan).

Representatives from Denny Dimin Gallery (New York, NY) say, “Untitled 2022 was a huge success for the gallery. Every day brought new sales. We sold out of work by Stephen Thorpe ranging from $10,000 to $35,000. We also placed several works by Jessie Edelman, Justine Hill and Paula Wilson including a large work by Edelman with Miami mega collector and philanthropist Jorge Pérez. The museum presence at this year’s fair was unprecedented and consistent throughout the whole week.”

Marina Vranopoulou of Dio Horia (Athens, Greece) states, “We are very happy with this year's iteration of Untitled and glad to report that a good number of curators and Museum directors were here, curious and eager to collaborate with us and our artists.”

“This was our first time participating in Untitled and we are very happy with the experience. We are pleased to have presented and sold work by our diverse and talented group of represented artists—Beverly Fishman, Sam Friedman, Jammie Holmes, Jason REVOK, Paul Verdell, Natalie Wadlington, and Tyrrell Winston. As a gallery in Detroit, it’s important for us to show outside of the brick and mortar of our gallery space, so taking part in Untitled has been a great way for us to meet with international collectors,” says JJ Curis, co-founder of Library Street Collective (Detroit, MI).

Luis De Jesus Los Angeles states, “In our ten years exhibiting at Untitled Art fair, we have not seen a more energetic and crowded opening. It was a frenzy! Twelve works were sold within the first two hours.”

Miami-based Jupiter Contemporary shares: “The fair was a great success for us in terms of introducing our artists to new audiences. Omar’s curation of galleries this year was spectacular and it’s exciting to see how the fair continues to grow.”

Richard Saltoun of Richard Saltoun Gallery (London and Rome) adds, “Untitled has been a fantastic fair for us. We met and sold to several new private collectors and made important relationships with several key American institutions. Sales were strong and there were interesting and engaging collectors every day.”

"Participating at Untitled Art has been very important for Praise Shadows. As a gallery that is just about to turn two years old this week, I was proud to return for our second year with a presentation focused on two artists who speak to our environmental impact. Within the first few minutes of the VIP opening, Duke Riley's Echelon of Uncertainty (2022) was acquired by the 21c Museum Hotels Collection. Moreover, within the first few hours, all of Jean Shin's S.O.S. series, beautiful works from her public art commission at Olana, were acquired by major museum trustees for their personal collections. The quality of galleries and of collectors was stellar, all the way through closing of the fair." Adds Yng-Ru Chen, Founder and CEO of Praise Shadows Art Gallery (Brookline, MA).

“I felt there was great energy in the room all week and we had a very successful fair with sales of work by nearly every artist we brought. There was particular interest in Olivo Barbieri’s large-scale Capri #12 and John Divola’s two photographs from Zuma Series, iconic works from the 1970s. We were also thrilled with the reception of two more emerging artists, the L.A.-based Nigerian American artist David Alekhuogie and Mexico City artist Omar Barquet. Our clients love Untitled as a fair where they can see and acquire work by serious, good quality artists at an accessible price point,” includes Yancey Richardson of Yancey Richardson Gallery (New York, NY).